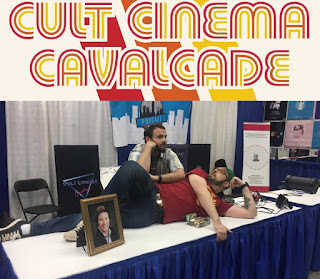 This is Naptown Nerd.
This is Brandon.
This is my old movie blog.
This is my farewell to Cult Cinema Cavalcade.

Five years ago, one of the best friends the universe has ever granted me and I set off on a journey to share our friendship with the world in audio form (I'll be the first to push up my glasses and tell you its actually six as we agreed and slowly planned it over the course of the year prior to the first episode publishing.) And five years ago, this other creation of mine ceased to post new content. Between Why So Blu, Cult Cinema Cavalcade and life itself, it was just too much extra on my plate. And because of that, it felt returning here would be the proper channel to deliver the news on Cult Cinema Cavalcade's conclusion.


.
Shutting down Cult Cinema Cavalcade wasn't an easy choice, but one I am very comfortable with. When starting the show, I had a personal goal of getting it to at least five years and reassessing where it had come and if it could go anywhere from there. At the end of the day, it was clear to me that the show had run its course and I was eager to move into a new podcasting endeavor. The show could have ran in place, sure, but there was nowhere else for it to go. I'm proud to have had a part in creating a well oiled machine like that, but I'm also someone who wants to be challenged, create and evolve.
.
I'm insanely grateful and honored by the success the show reached in its five years. As of writing this, we just received the Pop Con Podcast Award for Best TV/Film for the 3rd time in 4 years. That's a total of 4 awards during our tenure (We won Best Editing/Mixing one year). And they've only been dong that awards program for the last 4 years. Beyond that, the following we've had, listenership, interaction and the eye-opening amount of subscribers/streaming numbers of people that want to listen to this drivel is humbling.
.
I became more known for Cult Cinema Cavalcade than all of my other endeavors. In fact, many of you may not have known this blog even existed. I'll wear the CCC association as a badge of honor and one of the brightest spots in my timeline forever. I'm very happy for the work Cullen and I created and shared with you over the five years. It feels only fitting to announce its conclusion on the weekend of Pop Con, which has been a home for us the past five years.
.
There were MANY people who helped make Cult Cinema Cavalcade a success. Many who championed it and we our eternally grateful. Jessica Alsman was like our 5th Beatle and truly was game for ANYTHING we threw out her. Aaron Neuwirth always brought his A-game and has sincerely been one of the best colleagues in the podcasting world. Jim Dietz is a godfather in the world of geekdom and podcasts! Troy Brownfield always blew me away with his knowledge and talking shop through the crazy 80s. Buy one of his books, too! Rachel Frend was possibly one of our biggest cheerleaders and a true help for catching editing mishaps I may have had. She can also quote the show better than I can. ALSO - she probably gave us the movie I had the least joy of sitting through AND having to prep an episode for! Russell McGee, always a pleasure, always game. James Oster, we'll continue to talk hack and slash, don't you worry. Katie Rife might have been one of the most perfect fits for the show. A shame we didn't get to have her on more. One day I hope we finally see Bianca Allaine's film Zombinatrix! Everyone who came on the show was great.
.
I had many a great experiences with guests, too! I got to talk to Shelley from Friday the 13th Part 3! Todd Farmer! Lil Kev from Always Sunny! Someone from a Neil Breen movie! Probably the highlight was having a full on hour long convo with Linnea Quigley. She even texted me Happy Thanksgiving and kept in touch for a bit. There were many other people who helped or supported the show in big ways over the years like Carl Doninger and the Pop Con family, Tony Troxell and Geeking In Indiana, Johnny Lyles & Mandy Montgomery, the guys from Literate Gamer (Nick Rust and John David Small), Shaun Burris of Shadow Nation, Matt Quiett, DAVID BANKS, Jeff Chandler, Megan Splichal, Geoff Arbuckle, Audrey Lane, Michelle Suter-Shoemaker and I'm sure there's a big big big list of people I forgot. You can listen to my scrambled together farewell in podcast form, maybe i said it there?
.
Finally, the biggest of thank yous to producer Brad Shoemaker and of course my cohoster Cullen. What a terrific and lucrative ride this has been.
.
What's next for me? Is the Naptown Nerd blog back? Eh, not so fast on that. The plan for myself is to return to the podcasting streamwaves this September with an all new show that has been given the go ahead at Creative Zombie Studios. Yes, it will be film and TV related, but its going to offer myself the opportunity to be less limited and be able to explore a bit more. If you've been a fan of any of my writing or podcasting ventures, I think you're going to love it. There will be details trickling out in the months to come.
.
But that's for the road ahead. Now is the time to close the chapter that is Cult Cinema Cavalcade. Once more, THANK YOU so much to everyone who had a part in this be it a guest or a listener. I hope you will look back fondly on this show as I will and I can't wait to intrude your ears again with more movie blabber very soon.
.
(And yes, the title of this article was Halloween-inspired). 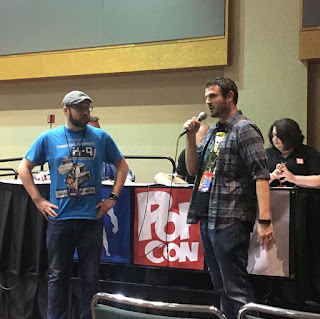 Posted by Brandon Peters at 8:36 PM