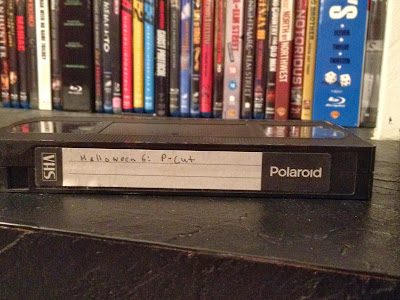 He hears the voice too, you know.  Just like that other boy who lived in that house.
~Mrs. Blankenship


This part of our story takes place in 1996 when I was 14.  Things were very different back then.  You kids nowadays can get this thing pretty damn easy.

Halloween 6 came and it went for most people.  But for fans of the series, this movie would never ever leave our consciousness.  Shortly after the film opened, people started realizing that there were things in the trailers, promo images and behind the scenes pictures that never happened in the movie.  On the old message boards of yore me and fellow obsessives began wondering about this.  And finally, Fangoria reported on the extensive reshoots and elements that had been removed from the film.  There was a whole other version of this movie that we were not shown.  As fans, we wanted to see it.  Badly.  This apparently wasn't your run of the mill, delete a scene or two either.  Apparently, this thing had 45 minutes of footage giving the film a different feel and story. 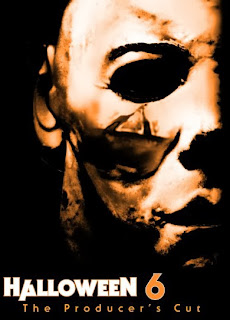 Then it dropped.  This, for some reason dubbed "Producer's Cut" dropped.  I have no idea why it was called The Producer's Cut, because it had been producer Paul Freeman who was behind going back and hacking this film to pieces.  There was a test screening of the film held for what is reported to be an auditorium full of 12-14 year old boys.  And there's your mistake right there.  Letting these kids dictate the subject matter of what was trying to be an adult horror film dealing in cults, incest and witchcraft.  So, there was a bit of a freakout and the decision to make changes came about.

I was 14 at the time, and like hell wanted to try and score this thing.  People I chatted with frequently on message boards and geocities sites were slowly getting them.  But there was a problem.  Nobody wanted to make copies for one another.  Once they got one, all of sudden, they didn't want to help with everyone else.  Or there was the other option, which was hard as hell for me - The Trade!  I really didn't have anything of video value to trade for.  In all honesty, this film was gonna be my first "rare item" of this sort. 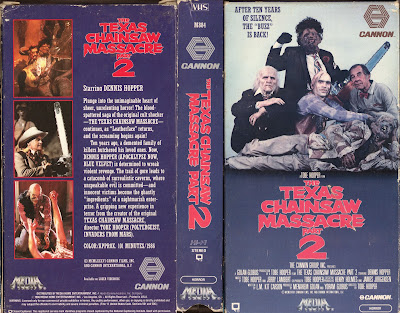 Then, I found somebody.  There was a person willing to trade me a copy of Halloween 6 Producer's Cut in exchange for the newly released Collector's Edition of The Texas Chainsaw Massacre 2.  I already had the movie on VHS, but if going out and getting this new one and double dipping meant getting me this Holy Grail item, then screw it I'm in.  The tape was supposed to contain a director's cut, trailers and deleted scenes at the conclusion of the film.

As most horror fans know, those thing ended up not being on the VHS.  It was a massive packaging mistake and pissed off a lot of people.  Before you all start calling me out for being an asshole, allow me to complete this story.  Now, kids, back in the day when copying a VHS tape, things had to be done in real time.  That means, if a movie was 2 hours, it would take 2 hours to copy it.  And also, it took 2 VCRs out of commission.  So, when I went to copy Texas Chainsaw Massacre 2, i set it up and started the recording as a I was going to bed that night.  Then the next morning, I popped in the tape, checked to make sure it had recorded.  I just pressed play, and fast forwarded it a little bit to make sure it was good.  Then I packed it up and shipped it out (well, my mom did). 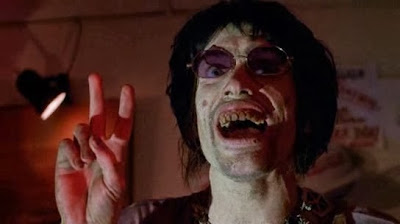 A couple days after this, my Producer's Cut showed up in the mail.  I was in geek heaven.  It was the most amazing day ever.  I finally would get to see everything I had heard about.  I had the most super super super rare collector's item from my favorite series.  However, on the other end of things...I discovered about packaging error of Texas Chainsaw Massacre 2.  I received an e-mail from the guy...furious and wishing some of the worst the Earth and the hell dimension could possibly offer me in this existence.  I then popped in my tape...he had to have been mistaken.  Whoops. He was right.  It was the regular ass theatrical cut and nothing after the credits.  I felt like shit.  There was nothing I could do.  I had nothing I could've offered.  And he probably thought I was a filthy liar.  So I never responded.  If you've that guy who was wronged, know its 17 years later, but I offer my sincerest of apologies for this mishap.  I was 14 at the time, honestly didn't realize what I had done until it was far too late and have always kinda felt crappy about it.  But, if it means anything, you rocked a young film geek's world with the tape you sent.  I still keep it to this day and always will.  Its one of my first true Holy Grail collector items I ever had.  And I'm no longer big into the collecting things like that anymore (aside from movies), but I'll always keep that. 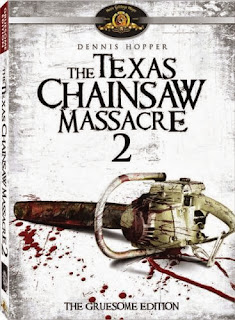 And...hey...in 2006 MGM released Texas Chainsaw Massacre 2 "The Gruesome Edition" on DVD in a special edition and it had those scenes and much more.  The Producer's Cut of Halloween 6 STILL isn't available by regular means.  So, it all evened out in the end, right?

Don't worry, we're not done, just like the end of Back To The Future Part II...

Sorry H20 fans, your time is coming, I promise.