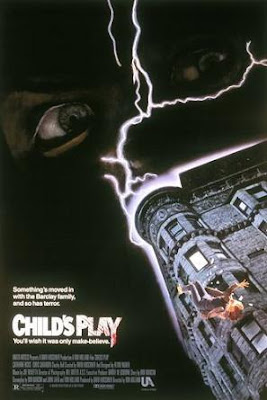 Hi, I'm Chucky, and I'm your friend till the end. Hidey-ho!
~Chucky


In less than two weeks, we're getting the 6th Chucky film!  Why not do a retrospective really quick here?  I didn't think you'd mind. Chucky was one of the last entries into those iconic movie monsters from the 80s.  That same year we would also be introduced to Pumpkinhead (we'll go that route if you want to, i don't mind).  Chucky was incredibly memorable.  But was anyone ever frightened of him?  How did he get so many movies and we never got a My Bloody Valentine 2? In my elseworld that has a 3rd Timothy Dalton James Bond, it also has My Bloody Valentine 2: Rose Is Dead, Violet Is Too. Maybe we'll know the answer by the end of this. 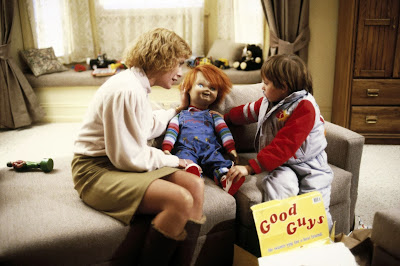 So here we are 1988 and Tom Holland returns to horror.  He's not only the man that brought us Fright Night, but he wrote Psycho II as well.  We also get Chris Sarandon right out of The Princess Bride and Catherine Hicks just a couple years off of Star Trek IV.  Finish that off with one of the greatest character actors of all time Brad Dourif voicing your villain.  So, what I'm trying to convey, this late in the slasher game, this was a competent production.  If you weren't Jason or Freddy at this point (Michael RETURNED in 1988), you were likely really cheap and didn't have the best hands behind everything. 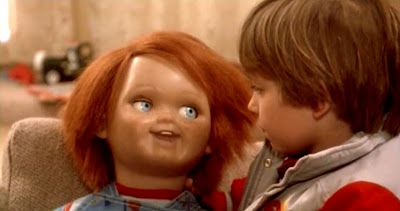 For all intents and purposes, the first Child's Play works as a horror film.  I think it most definitely works back in the 80s or early 90s better than present day, but I can see why people may have latched to this movie.  Chucky became a piece of pop culture following and probably has retroactively diluted what was likely successful to the untrained eye when watching it.  The film builds some really good scenes of suspense and is able to shroud with some mystery.  A lot of that helps when you have a solid director and a good cast.  Yes, the old joke was "he's just a doll, that's not scary, you can kick him".  While true, Chucky was a strong damn possessed doll and he also was stealthy and secretive in his attacks in this film. 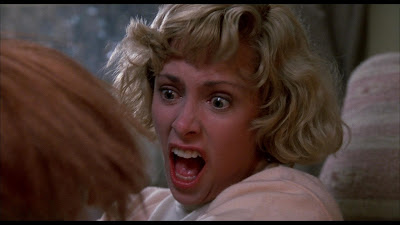 This movie wants to have its cake and eat it too, but it can't.  I'm not gonna lie, but there was a better, more patient film a couple drafts from what they produce.  Maybe it was even earlier but the studio demanded they have something iconic to stand up to Freddy or Jason.  There are two ways there is a much scarier, more mysterious film here.

Option one, if you have that opening scene where Detective Norris hunts down and kills Charles Lee Ray and then show him practicing voodoo before he "dies", you're not fooling us into thinking anyone BUT the Chucky doll is doing these murders.  If you cut that entirely and have it slowly come to a reveal through clues and some exposition later in the film, I might really believe that little Andy Barclay is doing this. 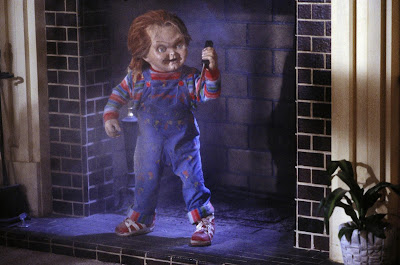 Second option, Andy Barclay IS doing the killing the whole time.  However, its not Andy Barclay.  Chucky has transferred himself into Andy's body and is doing it.  And the whole time you're making us think its the doll.  The doll itself has Andy's conscious in it.  Or maybe Andy is just dead because of the transfer.  Depends how dark you wanna go.

Do you like either of those options, or am I just blowing smoke out of my ass?  These were some thoughts I had watching it is all.  Please, I encourage you to tell me how dumb I am or give me your 2 cents on how to spin it.

The film we are given is just fine.  As a one-shot slasher, it works.  It covers all the ground you really can with this character.  Its not insanely violent or gory as this film wants to play in suspense and mystery more than shock.  Maybe I'm wrapped a little bit in nostalgia, but I think it rather still works if you let it.  It might be too dated for modern audiences.  But when you watch films of a certain era, you owe it to the film to try and place your conscious back to when the film was made and not place it fully on today's merits.  And if the film is somewhat competent enough, it'll play back with you.  There are plenty of slasher movies I'd recommend over Child's Play.  But it's not really that bad, and I think it has more appeal than a lot of those I would recommend.  It would definitely be most effective if shown to a kid between the ages of 8-10 (and I think when they made this movie back in '88, they knew that was a BIG audience of the slasher films and took advantage).


Next Time: Barclay Vs Chucky ROUND 2